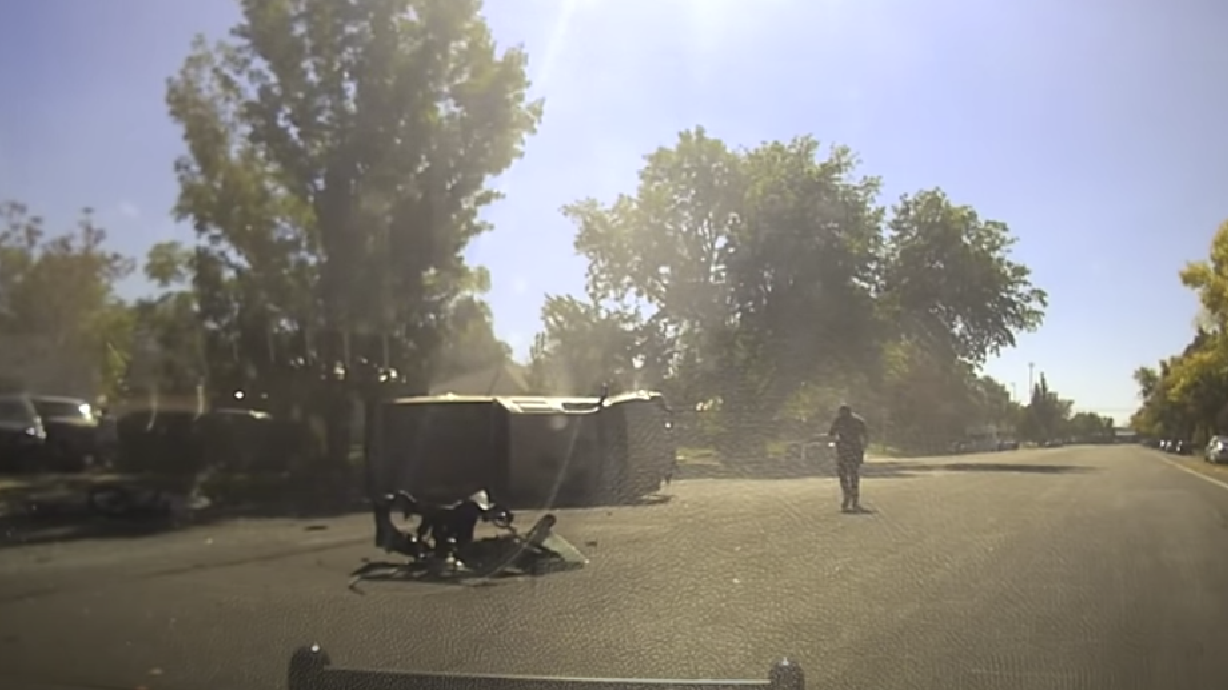 A screenshot from dashcam video shows a truck overturned seconds after colliding with another vehicle in Salt Lake City on October 16, killing the owner of Mims Bakery and seriously injuring another woman. The West Jordan driver reportedly fled police when the crash happened and was charged with manslaughter on Friday. (North Salt Lake Police)

SALT LAKE CITY – A man in western Jordan with a history of drunk driving and police evasion was charged on Friday with crashing into another car as he was fleeing officers again , killing a popular entrepreneur in Salt Lake City.

Christian Cody Facer, 39, is indicted by 3rd District Court with manslaughter and failing to respond to an officer’s signal to arrest, resulting in death, second degree crimes; two counts of DUI, a third degree felony; do not stop for the police, a class A misdemeanor and other charges.

Facer was fleeing from a North Salt Lake police officer who had been chasing him for about five minutes when he threw a stop sign in a residential area of ​​Fairpark at the intersection of 1200 West and 500 North, prosecution documents show . Facer’s F-250 T boned the driver’s side of a passing 2014 Nissan Pathfinder.

Thy Hoang Vu, 33 – also known as Thy Vu Mims – an entrepreneur from Salt Lake City, one of the founders of Mims Bakery and a community activist, was killed. A passenger in Vu’s vehicle was also seriously injured. A dog that was inside Mims’ vehicle also died in the crash.

Facer’s blood alcohol content was measured at 0.354 percent – seven times the legal limit in Utah, according to prosecution documents. Police said the Facer passenger told them the two had been drinking that day since 6 a.m.

The fatal crash began around noon on October 16 when emergency dispatchers began receiving multiple calls from a Ford F-250 with two men driving erratically on US 89 near 2600 South in North Salt Lake , “in and out of traffic” and “running people off the road,” the prosecution documents say. At least one witness told police the men were passing by and drinking from a bottle suspected of containing alcohol.

A North Salt Lake police officer spotted the high-speed vehicle near 350 North and attempted to stop it. Facer pulled up to a red light at Eagle Ridge Drive and turned on his right turn signal, apparently indicating he was about to stop. Instead, when the light turned green, he fled, according to police.

The officer chased the truck down I-15 with its overhead lights and siren on. The North Salt Lake Police Department recently released video from the prosecution officer’s dashcam. KSL.com is warning readers that the video contains a violent crash.

In the video, traffic on I-15 is moderate and many vehicles do not stop for the officer who had turned on his hazard lights and siren. At one point, the officer can be heard saying, “Move over! »Of frustration to a motorist in front of him. Charing’s documents allege that Facer sometimes exceeded 100 mph on the highway.

The officer followed as Facer exited at 1000 North in Salt Lake City and headed west where several cars were driving east but westward traffic appeared to be light. Facer then turned onto 1200 West and headed south through a residential area on the narrow road. In the video, Facer and the officer pass a car in the same direction as the chase.

Facer executed a stop sign and traffic light before executing the stop sign where the fatal crash took place, according to the charges. Police said it was going between 65 and 70 mph most of the time. The speed limit on 1200 West varies between 25 mph and 30 mph.

A police supervisor who was listening to the chase on police radio – something that happens with all police chases – appears to tell the officer at some point in the video that he may need to end. the chase, although the audio from the video is mostly drowned out. by police sirens. About 20 seconds later, the collision occurred.

“Send in a medical examination,” the officer told dispatchers after reporting that a “head-on collision” had just occurred.

The impact of the collision propelled the Pathfinder into an unoccupied car parked in a driveway about 3 feet away, the charges said. The F-250 ended up on its side.

In addition to the other five counts, Facer was also charged Friday with reckless driving, not having a locking device in the car and aggravated animal cruelty, Class B offenses; having an open alcohol container in a vehicle, a Class C offense; and five traffic violations, including speeding too fast for the conditions, not yielding or stopping, and not obeying a traffic control device.

Facer has a history of drunk driving and absconding from the police, according to court records.

Prosecutors have requested that Facer be held in the Salt Lake County Jail without bond pending trial.