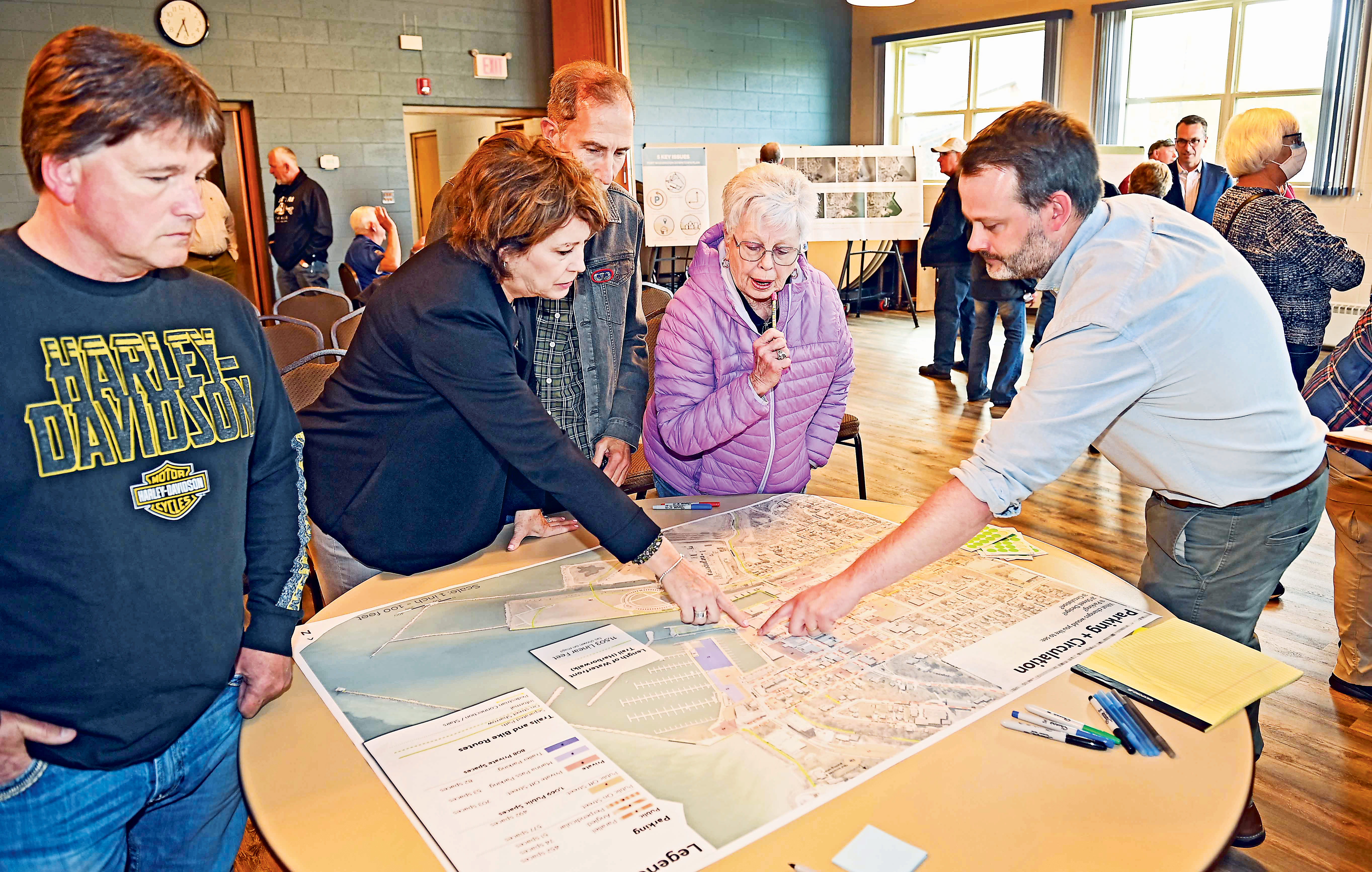 Port Washington officials recently got their hands on their plans for downtown and the lakefront when about 50 people showed up to give their thoughts on changes to the central business district and marina.

As with many things, their opinions varied, but the things they enjoyed about the area were, for the most part, consistent – the views of the lake and the water itself, the sunrises and fishing, the restaurants and parks, and the atmosphere of a small town.

Some, however, said the town center and lakefront looked like a “mish-mash,” that the area was underused and the views they cherished were hidden.

In written lists at five stations around the venue and in response to questions during an interactive presentation, they listed concerns about lakefront access, parking issues, a loss of scenic architecture and a lack of cohesive design, less than inviting businesses, and overbuilding.

But some said they see downtown and the lakefront getting better every year and praised the fact that downtown is getting busy again.

“I’ve lived here since 1984 and it’s finally becoming appealing to residents and visitors,” one person wrote.

Others praised the fact that the area is walkable and has more visitors, noting it will help businesses thrive.

They were asked their opinion on five key issues – the marina and waterfront and how they define the city, the mix of commercial and residential uses to embrace the character of the downtown, parking and traffic to meet the changing downtown conditions, making Coal Dock Park a year-round destination and the entire downtown district that extends beyond Franklin Street and Grand Avenue.

When asked what they wanted to see in five years, their suggestions ranged from a place to sail dinghies in the harbor and rent kayaks to creating a neighborhood that honors the historic fishing heritage of Harbor and protects waterfront views.

Stronger connections between Franklin Street and the waterfront are needed, some said, while others spoke of the need to reclaim lost parking spaces near the marina.

“It’s getting harder and harder to enjoy the marina,” one person wrote.

In terms of parking, among the suggestions made were that the city negotiate the use of empty private parking lots downtown on weekends, when the need is greatest, and the construction of parking lots with terraces on the last floor for public use.

New developments, some wrote, should always include parking plans.

Some suggested turning Main Street, especially east of Franklin Street, into a pedestrian plaza, and others said more green space was needed.

Improvements to downtown intersections also need to be made, some said, noting that turning onto Franklin Street is difficult due to vehicles parked near the intersections.

While some people came out in favor of building a bridge between Coal Dock Park and Rotary Park, saying it would make Coal Dock more accessible, others vehemently disagreed.

Several people suggested that the city limit the height of buildings, and a few said the city should control the appearance of businesses in the area, saying there should be a coordinated lakeside and central aesthetic. -town.

Water quality was flagged as a concern by some, while others spoke of the need to relocate the water treatment plant and create a designated swimming area.

Coal Dock Park is vastly underused, many people agreed, and their suggestions for improving the area were varied – an outdoor theatre, an expanded harbor and car park, the creation of a docking place for tour boats, the creation of a public building, the planting of evergreens and their covering with twinkling lights and the creation of an artistic wading pool.

But a few people have suggested that the park should remain largely as it is.

“Keep the great panoramic view of the lake. This is priceless,” one person wrote.

The responses gathered from the workshop will be used by Graef, the town’s planning consultant, when formulating a design plan for the town center and lakeside.

A draft plan with recommendations is expected to be forwarded to the city in July or August, when a second open house will be held to review the plan.