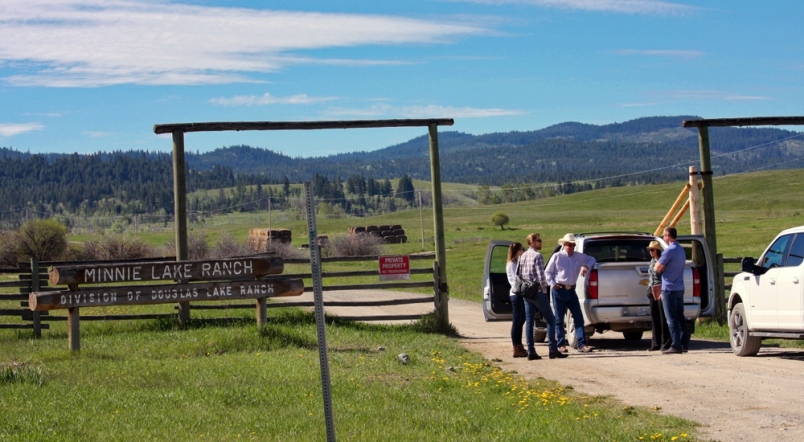 Iyou have been compared to the battle between David and Goliath; a small town fishing and hunting club competing in the courtroom against Canada’s largest working cattle ranch for the right to access public lakes.

Almost ten years ago, in April 2013, the Nicola Valley Fish and Game Club was frustrated with the restriction of its access to Minnie and Stoney Lakes and decided to take the matter to court.

Minnie and Stoney Lakes are located southeast of Merritt, on the sprawling Douglas Lake Ranch owned by Stan Kroenke. Kroenke is an American businessman who owns Kroenke Sports and Entertainment, numerous professional sports franchises and husband of Ann Walton, a Walmart heiress.

“Our club decided to try to fight to keep public access open to public places,” said McGowan. “We took Minnie Road and Stoney Lake, which was once part of Pennask Lake Road. To set a precedent, we thought we could get the government to sit down at the table and deal with the people of British Columbia when it comes to keeping public highways open to public places. We found out that they had a policy and a new plan to allow private landowners to block public access to take over and manage Crown lands and lakes on their own, and we figured it was was terrible, we have to try to stop it, so we did it, we filed some lawsuits.

These lawsuits were filed in the Supreme Court of British Columbia, where after a 20-day trial the judge ruled in favor of the Fish and Game Club and they also received special costs.

This decision was then appealed by Douglas Lake.

“And also, Douglas Lake appealed that the road was public,” McGowan said. “A Crown granted trail, which the law says is public if it is listed on the original Crown grant they appealed, and the trespass law that says if they flood their land with an agricultural water permit given by the government, they can prevent the people from going to public lakes as they go on private land to go to the public part of a lake.

The British Columbia Court of Appeal then reversed the first case and ruled in favor of Douglas Lake Ranch.

“In this case, they ruled against four existing laws, and I have no idea how that now applies to those laws,” McGowan said.

“The land law, the law on roads, the law on land titles, the law on trespassing. I have no idea now that they have ruled against these acts, how this will apply to people in the future.

“The Court of Appeal of the Supreme Court of Canada has just dismissed our case without having heard it and ordered Douglas Lake to pay the costs”, lamented McGowan.

“And according to our lawyer, they don’t have to give you a reason to fire him. You’ve just been fired, that’s all, end of story.

To add insult to injury, the NVFGC was ordered to pay legal fees to Douglas Lake Ranch for the pending litigation, for which they have now been billed for $ 44,000.

“This is just the invoice we received for the lawyers from the first court of appeal, and they were awarded for the costs of the appeal from the Supreme Court of Canada, and we don’t have an invoice yet. for that, ”McGowan explained.

NVFGC has been able to raise $ 200,000 through fundraising over the years to cover its own legal fees, but McGowan maintains that she is unwilling to fundraise to pay for Douglas Lake legal fees.

“Myself and the Club have no desire to fundraise to pay the attorneys at Douglas Lake, that won’t happen, I won’t,” said McGowan.

“We don’t have the money. We might have to bankrupt the club or start a new club under a new name or whatever, but we’re not going to pay their lawyer bills. We could end up with $ 200,000 or $ 300,000 in debt here, which our club cannot afford to pay and we are not going to fundraise for it, that just won’t happen. We prefer to raise money to clean up a river or do something for the environment, but not for someone to steal our lakes.

McGowan believes that there are, at this time, no further action that can be taken to continue to press for public access to Minnie and Stoney Lakes.

“Our club had no interest in winning anything for us, what we did was for the people of BC and for the future,” said McGowan.

“I have a granddaughter and that’s why I fought her. Other members of the executive have grandchildren, I mean we’re all old and we’re going to come out the other side of the door, and we thought we could make this world a little better. But unfortunately we have to apologize, because we have failed. But we tried. The people of British Columbia paid $ 200,000 to get there and for that we thank them and we apologize for losing. “

Still pending, a lawsuit between the NVFGC and three landowners, including Nicola Ranch and Douglas Lake Ranch, concerns access to Corbett Lake.