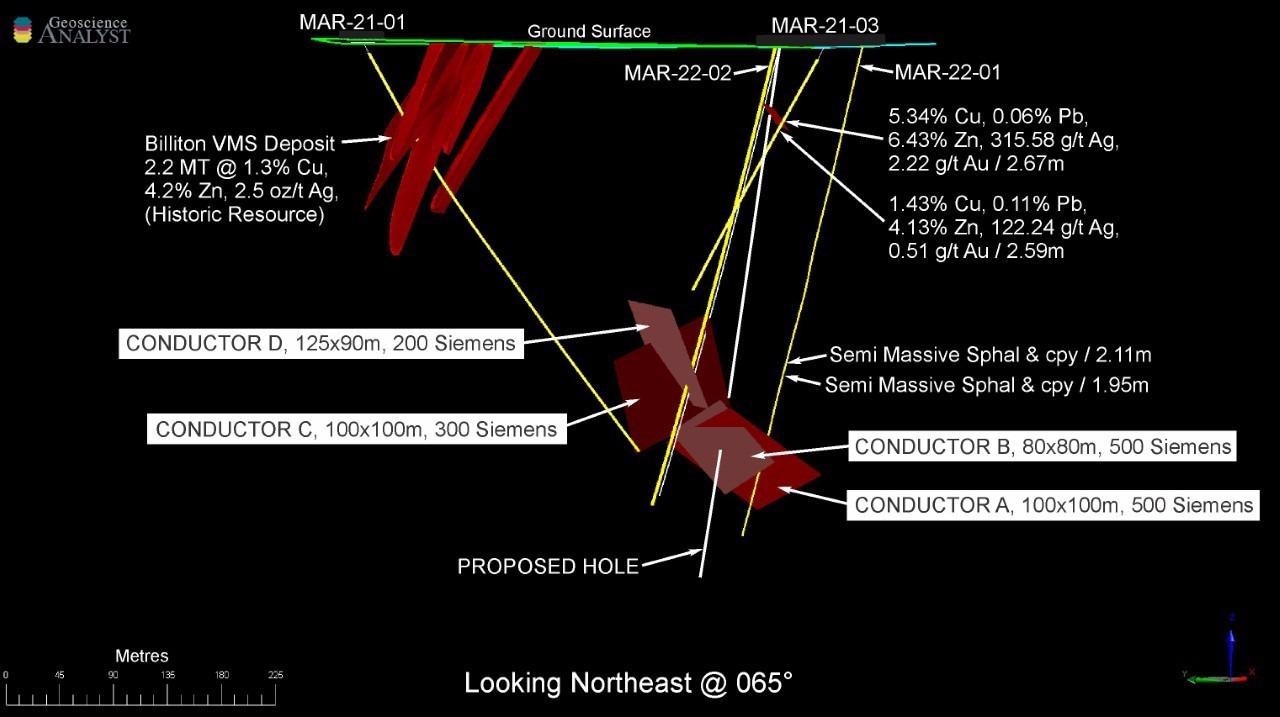 The BHEM surveys were completed on three strategically placed drill holes to aid in vectoring thicker sulphide mineralization at the location of a new high grade VMS discovery known as the VTEM/Deep IP discovery.

Results of the borehole electromagnetic survey

Strong conductors have been identified near the ends of all drill holes Mar-21-01, Mar-21-03 and Mar-22-02. Modeling indicates that all reactions are caused by a single highly conductive source with a total area of ​​at least 250 m × 150 m.

The study found four powerful conductors at a depth of 250m or more below the surface. Surveying was no longer possible at hole Mar-22-01.

Conductors A and B, in particular, are well-defined and extremely powerful conductors located 325 m below the surface. Conductors C and D were also found to be strong conductors in holes Mar-21-01 and Mar-21-03.

The fact that all three boreholes acquired the same strong conductive response at depth shows that the conductor is larger than predicted by the BHEM surveys.

The existence of such strong conductors at depths greater than 300 m below ground level is very promising, as it confirms the possibility of discovering significantly larger thicknesses of high-grade VMS mineralization at depth.

Additional diamond drilling is required to test these strong conductors, with the priority hole testing the core of the conductive source, which includes conductors A and B, as shown in the image above.

Despite the abundance of strong conductors at depth, which is included in the larger conductivity and chargeability anomalies described by the deep IP/magnetotelluric survey, a ground-based long-loop pulsed electromagnetic (LLP) survey encompassing the entire the big IP anomaly is seriously considered.

The large-loop electromagnetism will offer EM data at deeper depths than previous surveys (>300 m), allowing the definition of particular drill targets within the larger IP anomaly.

The first focus of diamond drilling this summer will be to test the solid conductors beneath the new VTEM/Deep IP discovery to better define this new zone of VMS mineralization.

An initial drill test of the Deeds Island VMS target will be the second priority. At this location, a large residual gravity anomaly (200 m × 100 m) is related to a large zinc geochemical anomaly, a zone of strong hydrothermal alteration and numerous aerial EM conductors.

A 3D model of the gravity anomaly is being created to help identify high priority drill sites. The Deeds Island target, which is located 6 km east of the Billiton deposit, is a promising VMS prospect that has never been explored by diamond drilling.