The Snow Lake project now contains four identified dykes with high-grade lithium intersections above 1% Li2O with TBL and GRP continuing to give positive results (see Table 1). In addition, the Company is pleased to report interceptions on the SGP and BYP dykes (see Table 1). The SGP and BYP dykes were located and sampled during the prospecting campaign last fall (December 06, 2021- Snow Lake Resources Ltd. samples up to 6.97% by weight Li2O from its project in Manitoba).

Of note are the deep and wide intersections of TBL-035 (see Table 1) seen at 429.50m depth. This could indicate that this pegmatite system could continue much deeper on the project than originally thought. Future drilling will test possible extensions at depth of the TBL dyke.

Philip Gross, CEO of Snow Lake, said, “Results from the 2022 drill campaign to date continue to impress with respect to expansion and definition. Dale Schultz, Vice President of Resource Development, and his team provide the validation needed to extend the resource to our 25s. life of mine target and provide the project with a starter pit at the SG/GRP targets. In parallel, metallurgical testing, environmental and feasibility studies are all progressing as planned as we accelerate the project towards licensing and ultimately commercial production. Our discussions now are very focused on establishing our position as a critical part of the developing vertically integrated supply chain of the North American electric vehicle ecosystem and we will continue to update the market on our progress at as they progress. »

Geology of the GRP and SGP dyke and host rocks – GRP dykes cut plutonic intrusive rocks of monzonite composition, exhibiting medium to coarse grained plagioclase crystals within a fine to medium grained mafic groundmass. Albitic to potassium feldspars are frequently present in the rock. The underground mass consists of amphiboles and occasionally biotite. Garnet was observed in small clusters within a rare melanocratic underground mass. The monzite has been subjected to considerable seracitic and hematitic weathering, often resulting in the destruction of the original plutonic minerals and giving the rock a “bleached” appearance. Small quartz and granitic Aplite dykes are common.

The GRP pegmatite dykes appear to trend 110° and dip about 60-65oh SSO. The dyke mineralogy is typical of lithium-bearing pegmatite dykes and consists of K-feldspars, quartz, muscovite and, to a lesser extent, biotite, tourmaline and rare garnets and very rare beryl. The lithium-bearing mineral is spodumene, which varies widely in grain size and distribution in the dykes. Spodumene crystals can vary in size from 1 cm to over 10 cm. GRP dykes often exhibit very large spodumene crystals, often varying in size between 10 and 15 cm long and, in the case of GRP-003, larger than the dimensions of the NQ core. The distribution of crystals in the dyke intersections is sporadic, with some sections containing up to 25-30% spodumene, and other sections spodumene poor, suggesting multiple pulses of fluids and crystalline slurry from the parent granitic magma. The mineralogy and mineral zoning of the dyke(s) will be further investigated over the next few months.

host rock – The TBL dyke cuts rocks of the Missi Group (1.85-1.83 Ga), which are mainly sedimentary rocks composed of heterolithic conglomerates, greywackes and sandstones. There are occasional basaltic to andesitic dykes and sills in the assemblage observed in the drill core. Greywackes are generally composed of fine-grained quartz and biotite, while the conglomerate matrix is ​​composed of biotite, actinolite, chlorite and small garnets (2-3 mm). The mineral assemblage is typical of rocks of the upper greenschist to lower amphibolite metamorphic facies.

crystallized pegmatite – The TBL TB-1 pegmatite dyke is oriented 040° and dips about 85° SE, cutting rocks of the Missi Group. The mineralogy of the dyke is typical of lithium-bearing pegmatite dykes and consists of potassium or albitic feldspars, quartz, muscovite and to a lesser extent biotite, tourmaline and rare garnets and very rare beryl. The lithium-bearing mineral is spodumene, which varies widely in grain size and distribution in the dyke. Spodumene crystals can vary in size from 1 cm to over 10 cm. The distribution of crystals in the dyke intersections is sporadic, with some sections containing up to 25-30% spodumene, and other sections spodumene poor, suggesting multiple pulses of fluids and crystalline slurry from the parent granitic magma. The mineralogy and mineral zoning of the dyke(s) will be further investigated over the next few months.

Analytic – The half cores are sent to the SGS Lakefield laboratory in Ontario for analysis. The carrots are initially ground to a size of -12.7mm, then chipped to 75% passing 2mm and finally extruded into a 250g paste which is pulverized to 85% passing 75 microns. Samples are fused with sodium peroxide and run on ICP-AES and/or ICP-MS generating analyzes of 56 elements.

Declaration of qualified person – The information in this press release has been compiled and reviewed by Dale Schultz, a Qualified Person as defined by SEC SK 1300 Rules for Disclosure of Mineral Deposits, and a Professional Geoscientist (P.Geo.) who is a registered member of the Engineer and Geosciences of Manitoba (#24846), a “Recognized Professional Organization” (RPO). Mr. Dale Schultz is the Project Manager and Vice President of Resource Development at the Snow Lake Lithium Project and has sufficient experience relevant to the crystallization of the LCT-type pegmatite deposits being evaluated. 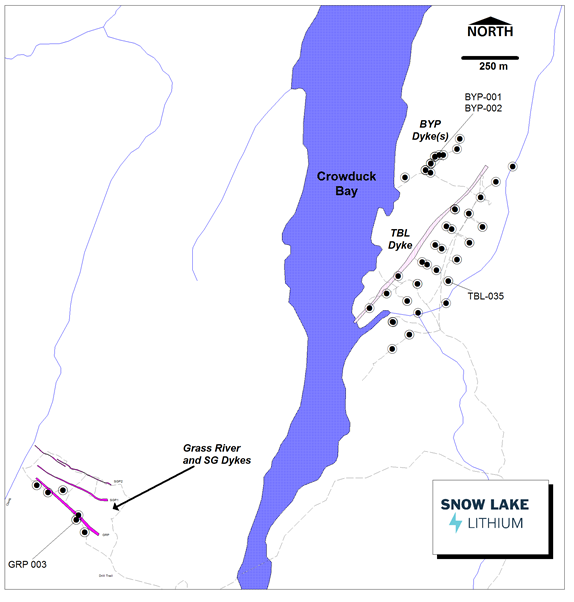 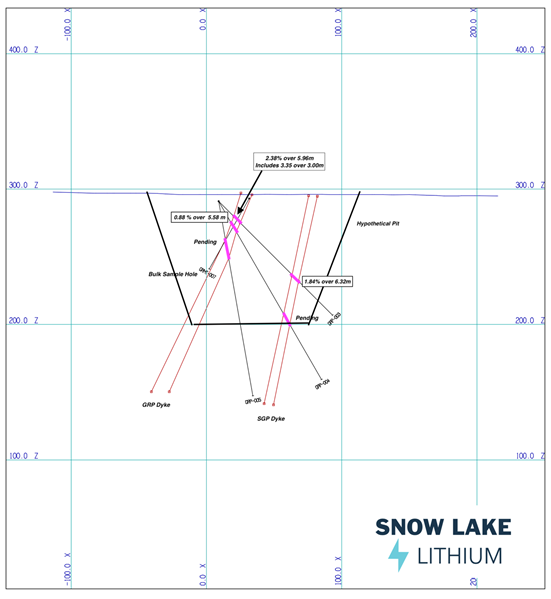 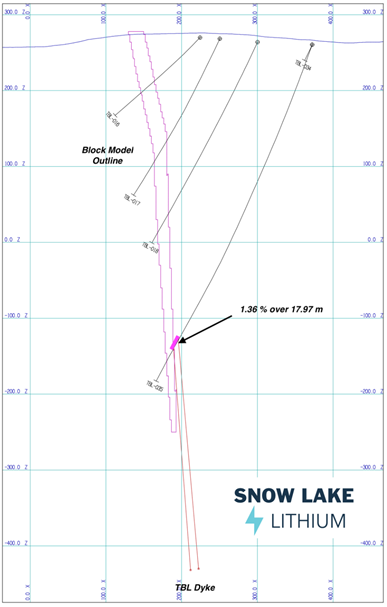 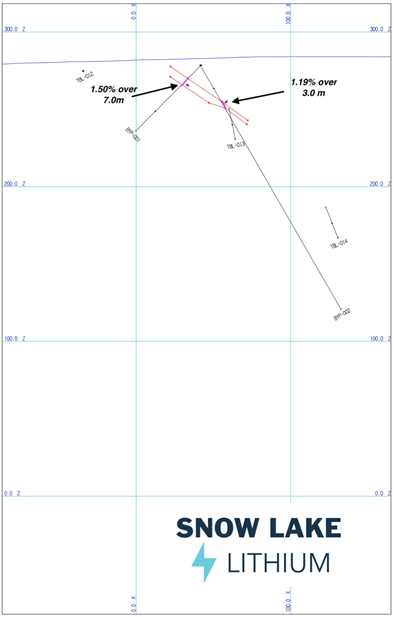 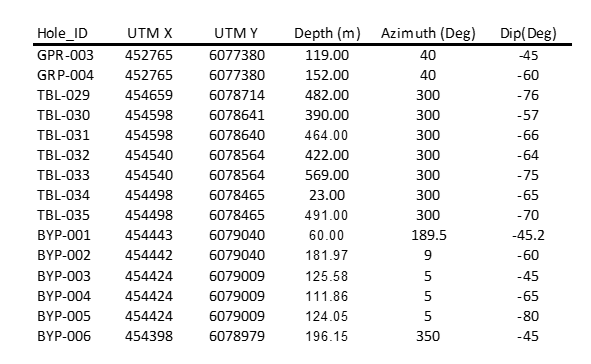 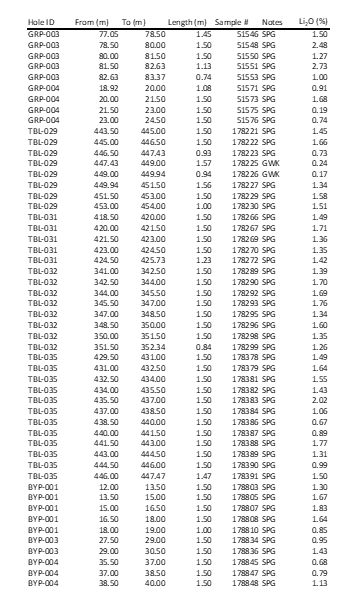 Snow Lake Lithium is committed to creating and operating a fully renewable and sustainable lithium mine that can provide a fully traceable, carbon neutral and safe product for the electric vehicle and battery markets. We not only aspire to set the standard for responsible lithium mining, but we intend to be the first lithium producer in the world to achieve Certified Company B status through the process.

Our wholly-owned Thompson Brothers lithium project covers a 55,318-acre site that has only been explored at 1% and contains an identified resource to date of 11.1 million metric tonnes indicated and inferred at 1% Li2O.

See the source version on accesswire.com: